Recently, I finished a nice project for the group of Prof. Giulio Superti-Furga. They do research on leukemia and discovered an antibody that binds to a tyrosine kinase that is responsible for the development of leukemia. Therefore, the kinase is a target for fighting the disease. The binding of the newly discovered antibody shuts down the protein. 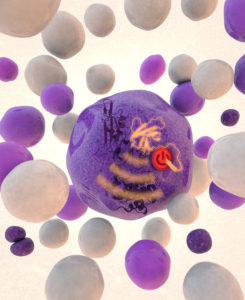 My task was to illustrate that in a single image that would be suitable for the cover of the journal CELL. I was given some key words for inspiration (which is a great help in order to understand what the client is after) and sent a few links for background information on leukemia. Eventually, I decided to do a google image search to get some inspiration about how the image could look like. I realized how visually leukemia is strongly associated with the microscopy images of purple stained cells. I decided to emulate this look in my illustration but decided to take it to 3D. I included a cartoon representation of the tyrosine kinase. To indicate its involvement with leukemia, I colored it purple also. The antibody, that deactivates the kinase, I highlighted in yellow and the ‘waves’ indicate its effect on the bound kinase. To illustrate that the binding of the antibody turns off kinase activity and thus stops leukemia, I modeled an arrow to the terminus of the antibody that appears to press a (fictitious) leukemia OFF button.
It’s rather challenging to make a complex interaction as this fully self-explanatory in just one illustration and without the use of words.

The final image did not make it on the CELL cover, unfortunately. However, it found use elsewhere:
KAMPF GEGEN KREBS – Die molekulare Archillesferse